today, radar networks has unveiled what we've been working on. check it out.

not to replace this, but to really be the fotap in fotap. check it out

This lost classic, shot on 16mm in a wintry Berlin in 1993, explores the origins of the now monumentally massive German Trance and Dance music scene.

With interviews with luminaries such as Dr Motte, Paul van Dyk, Laurent Garnier, Paul Browse, Mijk van Dijk and MFS label supremo Mr Mark Reeder this now legendary exploration into the underworld of what was the most significant force in driving dance music forward in the 20th century. It contains rare early footage of the 1991 and 1993 Love Parade, and of the now bulldozed Mutoid Waste Company land, E-Werk and Tresor - Berlin's legendary (and now closed) clubs that started it all in the former East Berlin.

Directed by Ben Hardyment, this documentary is imbued with an uplifting and extremely positive energy - there are rumours of a film sequel in the pipeline, but for now, sit back and enjoy 25 minutes of pure trance music history.

aol fucked up and releases user search data yesterday. some of the queries are very interesting

All the photos I have taken are here, and photos of me by others are here and general conference photos are here.

when buying laundry detergent at the store, be sure that its actually detergent, and not fabric softener. the seventh generation

bottles are the same color. i'm used to

. i made the mistake when buying it off the shelf, and got two bottles at the time.. and then never really looked at it closely again until i had had bought "more". doh! at least there were no ill effects, other than my clothes being nice and soft :)

Colbert, who spoke in the guise of his talk show character, who ostensibly supports the president strongly, urged the Bush to ignore his low approval ratings, saying they were based on reality, 'and reality has a well-known liberal bias.'

Colbert told Bush he could end the problem of protests by retired generals by refusing to let them retire. He compared Bush to Rocky Balboa in the 'Rocky' movies, always getting punched in the face--'and Apollo Creed is everything else in the world.'

Update: Thanks to Butter71 for links to the transcript and video! w00t!

Update 2: Here's a high-quality torrent of the video. " 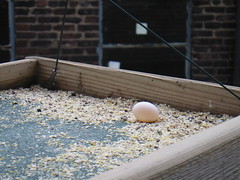 i noticed this lonesome egg sitting in our bird feeder a few minutes ago. it wasn't there when i woke up this morning. perhaps leela gave one of them a big scare?

yesterday was the river run in jacksonville and my dad ran the race.. and the local paper's website had a pic of my mom!

i also stumbled across current_, which i guess isn't really new, but its neat. better background tv than old history crap all day.
Collapse